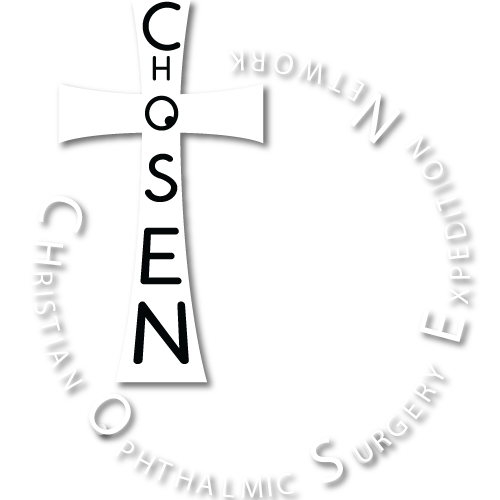 Emilio and his 14-year old daughter Elvia traveled 300 miles from Huasteca Potosina, an isolated mountain community in central Mexico, to arrive at a ChOSEN project in Montemorelos, Nuevo Leon. Huasteca Potosina is located in such a remote area of Mexico that the native inhabitants do not even speak Spanish, but rather have their own dialect called the Nahuan language. Emilio and Elvia’s village in Huasteca Potosina is extremely impoverished with only one community drinking well and no electricity. Emilio’s family had been afflicted with a genetic predisposition for early-onset cataract development causing severe visual impairment for five generations.

Emilio’s cataracts had progressed to the extent that he could no longer work as a laborer to provide for his family. Furthermore, it was discovered that his 14-year old daughter Elvia also had cataracts so severe that she could no longer see to do her school work. Resident Christian missionaries who had been evangelizing their area arranged for them to meet ChOSEN.  Emilio and Elvia both underwent successful cataract surgery during the same ChOSEN project and were able to return to their village and productively resume work and school, respectively, acting as a powerful testament for the rest of the community to the authority of the Gospel. The resident

Christian missionaries had been struggling to gain a foothold for the Gospel in Huasteca Potosina because the inhabitants were distrustful of outsiders and believed in magic and sorcery for healing disease.  The ability of the ChOSEN eye surgeons to “open the eyes” of the blind by restoring the vision of Emilio and Elvia has enhanced the credibility of the Gospel message preached by the Christian missionaries in Huasteca Potosina, now providing them with new opportunities for spreading the Gospel throughout the entire region.

WARNING: Internet Explorer does not support modern web standards. This site may not function correctly on this browser and is best viewed on Chrome, Firefox or Edge browsers. Learn More.